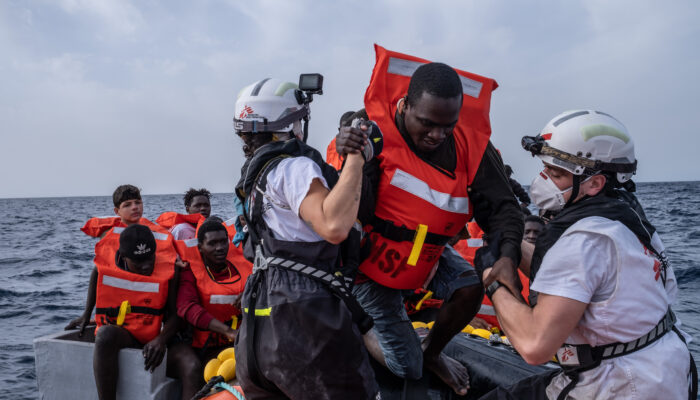 All over Europe governments struggle to cope with people fleeing war, violence, instability, or a future that offers no prospect of a safe life. Some call it a refugee crisis, other a political crisis. Many see how Refugee Law is being violated: Europe – including the Netherlands – does not offer the protection we are legally required to. In the coming decades the support of refugees, internally displaced people and other migrants will probably require a growing effort from humanitarian organizations. At the same time, the topic of migration is increasingly being politicized, putting humanitarian organizations in the middle of a political struggle.

Are the concerns about the large numbers in migration justified?
Leo Lucassen: Whatever example you take, whether it’s the partition between India and Pakistan in the 1940s or the population exchange between Turkey and Greece in 1923, or what happened in Europe immediately following World War II (tens of millions of refugees in central Europe), people always worry about the effects that this influx may have. However, most of the worries brought to the table by politicians are not warranted at all, they are loose statements reflecting fear of change. Since the 1990’s, we are still in the framework of ‘the clash of civilization’. There is no such thing as Islamization and the large number of Muslim migrants doesn’t hamper with Europe’s culture.

But Islamization is happening, right? Example: the most common name in Amsterdam is ‘Mohammed’ spelled in different ways) and this wasn’t the case 30 years ago. How do you explain this?
Leo Lucassen: Yes, demographics in Europe are changing and we have more Moslims living amongst us. A part of them go to the mosque and do send their children to Islamic schools. But how the term Islamization is used, is not what I see. I do not see a trend in which our society is more intolerant than before and that the Islam is ‘taking over’.
In perspective: The percentage of the population that is born in another country or came as a refugee is maybe 2 percent in the Netherlands.

And what about other countries?
Leo Lucassen: if you compare the share of refugees per 1000 inhabitants, than the Netherlands is below European average. And again, these are numbers we can accommodate easily. However, the number shouldn’t be the reason to welcome refugees. We keep calling it a ‘crises’ but that’s not the case. We are dealing with a crisis concerning humanitarian implosion.

What about the influx of people from Ukraine coming this way?
Leo Lucassen: Yes. It is interesting to see what happened in March this year. The European Union decided that the Ukrainians immediately could enter without problems, they didn’t need to apply for asylum, and they could immediately enter the labor market.
People hit by the same Russian bombs in Syria were getting a different treatment. This shows how fluid it is.

How did the tone of debate – from historical point of view – evolve over time?
Leo Lucassen: Over the last 40 years, the tone has shifted and became more toxic since 1990. With toxic I mean the idea that ‘they – the Muslims – are taking over our society’.

What can we do about that?
Talk with them instead of about them. In this way we can replace the negative narratives by positive ones. Leo Lucassen: The way the Netherlands is welcoming refugees is connected to how we treat them. The assumptions that all the ‘Mohammeds’ are the same and homogenous is a thought that is built on racist frameworks. Also, the percentage of people who want to support refugees is still stable. We need more courageous journalists to show the real story.

Leo Lucassen: We have to go beyond calling out. Fact checking is important, but it is not sufficient. We need to talk about the system of reception! Make it a legal obligation of municipalities to create room for asylum seekers and make it a local small scale responsibility. It enables people to identify with refugees. Abolish the ‘Ter Apels’ since it is too big, it is far and people can’t understand/identify. It is true that some decisions have to be made on a national level but then it should go to the local level.

KUNO is organizing a series on migration. Read more about that here.