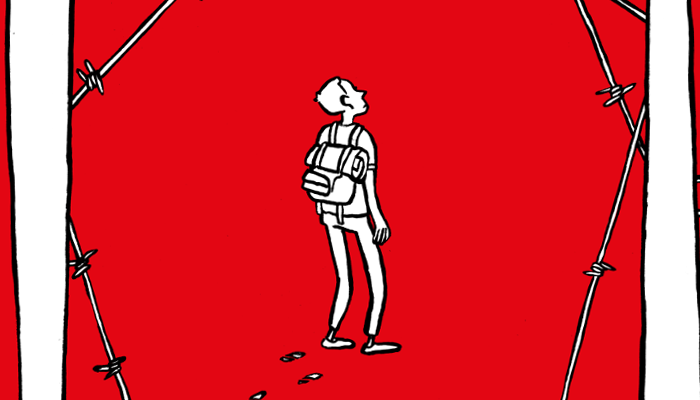 According to John Dalhuisen, former director of Amnesty International, humanitarian organizations should compromise on their ethical and moral standards, when it comes to migration. To not lose the battle from populists and extreme right winged, they have to search for a migration politics that is salable to the majority of the European citizens. During the first edition of ‘Humanitarian Hot Topics’ Dalhuisen explained his argumentation, which was received with both praise as criticism.

Migration is one of the biggest humanitarian issues of our time. People flee poverty and seek security in Europe. But many European citizens fear uncontrolled migration, and perceive it as a threat to their own culture, security and prosperity. How should humanitarian organizations position themselves, now that the call for a fortress Europe is getting stronger? Should they continue to hold on to their moral values, or be more willing to bend to the public opinion?

John Dalhuisen worked for many years at Amnesty International. He resigned in May 2018, expressing dissatisfaction with the organizational approach to migration. Now Dalhuisen works for the European Stability Initiative, the think tank of Gerald Knaus, architect of the Turkey Deal. According to Dalhuisen, humanitarian organizations are being imprisoned by their own idealism, especially when it comes to migration. They ignore the growing unease among European citizens when it comes to the arrival of large numbers of migrants. Instead of coming with workable solutions, they continue to propagate their moral standards. They lose the support and understanding of the public opinion, and make it possible for the extreme right winged and populists to predominate the discussion on migration, democracy and human rights.

During this first edition, Dalhuisen explained his argumentation in a short plea. Afterwards, we discussed his arguments with him, speakers from the humanitarian sector and the audience. This resulted in an interesting, fiery debate.

John Dalhuisen is a Senior Fellow at European Stability Initiative. He was Director of Amnesty International’s Europe and Central Asia Programme and Regional Office from 2012 to 2017. He had joined Amnesty International in 2007 as a researcher on discrimination in Europe, becoming Deputy Director in 2010 covering the former Soviet Union. Between 2001 and 2006, he was Special Adviser to the first Council of Europe Commissioner for Human Rights. He was called to the Bar of England and Wales in 2007 and studied Philosophy at Edinburgh University and Humboldt University in Berlin.

Marieke Mol is senior policy officer at the Bureau Migration Policy of the Ministry of Foreign Affairs in The Netherlands. From 2014 until 2015, she was liaison officer at the Taskforce for Greece – European Commission in Athens, Greece. In 2016, she was seconded to teh EU Delegation in Akara within the Framework of the EU-Turkey statement.

Evelien van Roemburg is the Europe Migration Campaign manager for Oxfam International. She leads the advocacy and campaign development and delivery of Oxfam’s humanitarian refugee response in Europe. She has previously worked at Oxfam Novib, lectured at the University of Amsterdam in conflict studies and refugee law, and worked in New York and Nairobi with asylum seekers and refugees. Evelien has master degrees in political science and law from the University of Amsterdam and from Columbia University in New York, and has almost finalized her PhD research on treaty supervision in the international refugee law regime.

Arjan Hehenkamp worked as a humanitarian since 1992, mainly with Medecins sans Frontieres. He started in Somalia, at the height of conflict and famine in 1992. Subsequently, he worked in several countries and crises, first as logistician and administrator, and thereafter as emergency coordinator. He became county-director in South Sudan for four years, after which he was appointed as Operational Director and finally worked for 6 years as General Director of MSF in the Netherlands.  In this capacity, Arjan was (amongst other things) heavily involved in his twin humanitarian obsessions: protection for and assistance to refugees and migrants, and the search for an effective and affordable regimen for drug-resistant forms of tuberculosis. Since early 2018, Arjan Hehenkamp works as Deputy Director for St. Vluchteling taking responsibility for programmes and advocacy, whilst working collaboratively with SV and IRC colleagues to propose new strategic directions for SV and its operational partnership with IRC. Arjan is also chair for KUNO, and is member of the supervisory boards of Warchild the Netherlands and The Hague Humanity Hub.

About the series ‘Humanitarian Hot Topics’