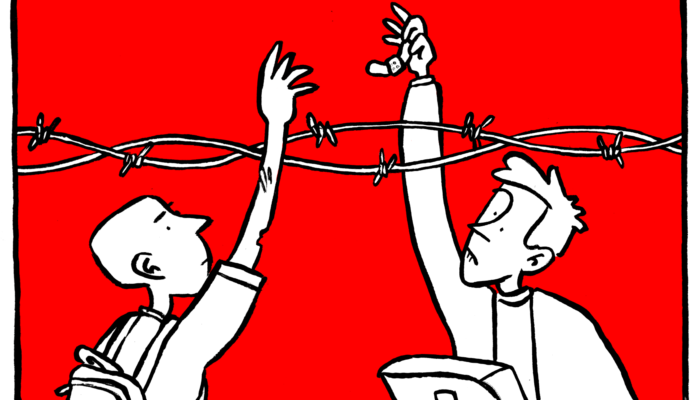 Illustrated by Mas Hab
As a follow up to a roundtable organized by KUNO in March, you are kindly invited to a KUNO-webinar for humanitarian professionals with an update on the current situation in North-West Syria. At this webinar representatives of the Syrian Networks League, a coordination body of 140 Syrian NGOs working in Northwest Syria, launched a Call to Action calling on the Dutch humanitarian community and the Dutch Government.

People living in northwest Syria continue to endure a severe humanitarian situation as their lives remain impacted by the effects of displacement, military operations, the protracted conflict and collapse of the Syrian Pound, as well as the threat of a COVID-19 outbreak. The ceasefire introduced in early March has provided significant respite from airstrikes and there have been fewer artillery bombardments. At the same time, reports of increasing incidents with improvised explosive devices and reports of clashes between non-state armed groups indicate mounting insecurity in Idleb and the Afrin and A’zaz to Jarablus areas. Some 840,000 of the nearly 1 million people displaced in northwest Syria remain in displacement, including some 500,000 children and nearly 180,000 women.

You can read the Call to Action here.

A short report on this meeting can be read here.

As a follow-up to this meeting, Clingendael Institute published a policy brief on treating Idlib as a protracted crisis.