Round Table on Idlib - Syria 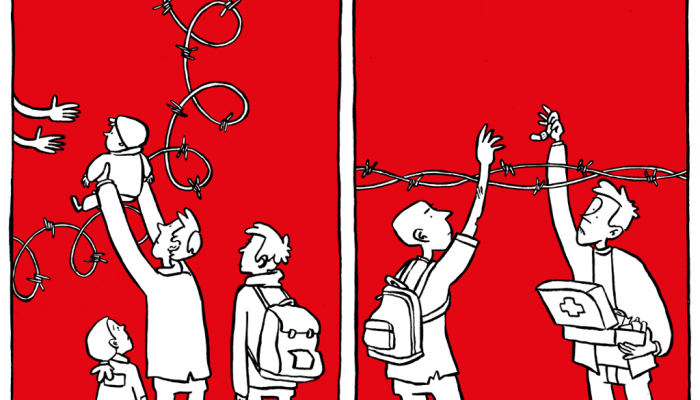 Nearly a million people are trapped in the northern Syrian region of Idlib. It is the worst humanitarian disaster in the nearly nine-year-long conflict; according to Mark Lowcock, Under-Secretary-General for Humanitarian Affairs and Emergency Relief Coordinator (‘the UN Relief Chief’), “the crisis has reached a horrifying new level.”

A humanitarian tragedy is unfolding as we witness, but public and political resentment is limited. In NRC Handelsblad, the Syrian Dutch men Ali al Jasem and Mohammed Kanfash made a compelling appeal to the Dutch people: Act for the people in Syria! To discuss the current dire situation in Idlib and to explore what Dutch humanitarian organizations could do to support the people in North West Syria, KUNO organized a meeting for Dutch NGOs to get updated on the situation, and exchange strategies and plans for joint actions. With introductions by: Mohammad Kanfash, Director of Damaan – Dutch-Syrian NGO, Ali al Jasem, researcher at Conflict Studies, Utrecht University, formerly active for MSF Syria and Arjan Hehenkamp, deputy director of Stichting Vluchteling.

Below follows a summary of the introductions that were given at this meeting.

Due to the timings of the latest attacks, which took place in winter, displaced populations are scattered all over the region, mostly in inaccessible and remote areas. The living conditions of new arrivals remains dire, and the groups are hard to reach. Doctors in Idlib have confirmed outbreaks of lice, scabies and leishmaniasis due to lack of WASH. Medical services can only reach most settlements once every 2-3 weeks. Another issue is the lack of food, widespread malnutrition can already be seen, starvation not yet. There is no education at all, also because school buildings are used for shelter purposes. The biggest concerns at the moment are health issues, especially since summer is approaching, and lack of resources for Syrian NGOs operating in the region. The combination of lacking access for INGOs and the Corona-crisis makes direct funding for local NGOs even more relevant. A potential solution to the problem of access would be to work through The Disaster and Emergency Management Presidency (AFAD) (https://www.afad.gov.tr/) and IHH (Humanitarian Relief Foundation based in Turkey).

The issues in North West Syria are highly political, and cannot just be seen as a humanitarian problem. The seize fire as agreed upon by Putin and Erdogan holds for now, but the humanitarian situation remains the same. Since many groups are operating on the ground, the humanitarian space is not always as clear, but there is a space in which NGOs could operate. Funding and awareness would be a solution for the organisations already operating in Idlib.

A need for more awareness on Idlib by Arjan Hehenkamp

The call for awareness was also acknowledged by Arjan Hehenkamp, who raised three key points for Dutch INGOs. This is a crisis with unprecedent proportions and conditions; there’s no massive action taken, which is what you would expect in a crisis of these proportions and there is a lack of (outspoken) frustration and pressure of NGOs and a lack of communication between these NGOs. There are two deadlines to keep in mind, the end of the agreed seize fire by Erdogan and Putin, and the renewal of the UN cross border resolution (10 July).