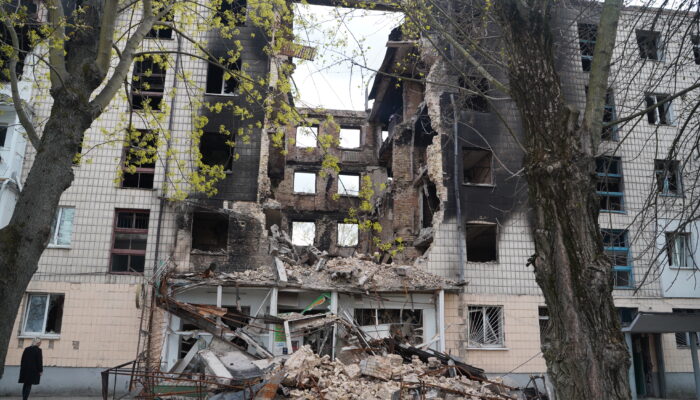 The war in Ukraine is bringing up various (new) humanitarian dilemmas for humanitarian organisations active in the area. Different mandates and different ways of working and funding, have of course implications for the choices NGOs make.

Reaching people in occupied territories in Ukraine or in Russia

Most international NGOs at this working session do not have access to Russia or to territories in Ukraine annexed by Russia. Access is incredibly difficult, but are organisations actually trying? Some manage to have limited programming or support through local partners ‘under the radar’. At the same time, the humanitarian needs are extremely high close to the frontlines and in Russia (e.g. Russia has the highest official (UN) number of refugees).

Not only local authorities in Russia and the occupied territories are a barrier for humanitarian assistance in these areas, but also the politicisation of the conflict is an issue. Strong political framing regarding the war on both sides of the conflict makes it difficult for humanitarian NGOs to assist victims of the conflict on the Russian side of the frontline (in the by Russia occupied territories of Ukraine or in Russia itself), like journalists, activists or Russian refugees. But not (attempting) to assist the people in these areas is contrary to the humanitarian principle of Impartiality, that requires humanitarian NGOs to assist the people with the greatest needs, no matter where or who they are.

Reaching people most in need in remote areas

Reaching the most isolated, often conflict affected, rural places in Ukraine and most vulnerable communities has turned out to be very complex. The capacity of humanitarian organisations should be extensive, there is enough funding and there are enough materials, and the facilitation of access by authorities usually permits that they can reach many areas of the country. However, humanitarian aid does not always come close enough to the vulnerable people in rural and isolated places. Working with local actors and networks, both formal and informal, is needed to maximise the ability for assistance to reach the most vulnerable people. These grassroot organisations have a strong local presence – also in remote areas, and manage to reach vulnerable people in those remote areas.

There was discussion on the question to what extent international NGOs could expect or demand neutrality from Ukrainian civil society organisations when Ukraine is fighting a war of self-defence. A war resulting from Russia’s attempt to acquire territory by force that is – according to international law – illegal, a war that is imposed on Ukraine by an aggressor (Russia), where the rights and lives of the Ukrainian people and territories are clearly and brutally violated. Quite understandably many Ukrainian people (wish to) fight back: you cannot expect all Ukrainian civil society actors to uphold neutrality, although quite a number do.

This also led to the discussion whether international NGOs – NGOs that stand for humanity and solidarity – could remain neutral in this war. For some humanitarian NGOs neutrality is firmly connected to their mandate (like the ICRC). Other NGOs, like some double mandated NGOs or human right organisations, could choose as a humanitarian NGO for outspoken solidarity with the Ukrainian people (a position described by Hugo Slim).

Impartiality: how about other humanitarian crises?

Prioritisation of in Ukraine by donor governments leads to prioritisation of political attention and funding to Ukraine whilst there is a lack of funding to other contexts/emergencies around the world (e.g. Yemen, South Sudan, Ethiopia, Pakistan, Afghanistan, etc.). Moreover, this has led to the prioritisation of preferential treatment of Ukrainian refugees over refugees from other countries. This is contrary to the humanitarian principle of impartiality: getting humanitarian aid to the people who need it the most.

Dealing with (potential) breaches of IHL by Ukrainian forces

There are indications that the Ukrainian military sometimes positions itself close or inside civilian infrastructure, like medical facilities, community hubs or town halls. This compromises the protective status these infrastructures have because they are targeted by the Russian army. These practices endanger civilians and have a negative impact on the ability of humanitarian organisations to provide medical and other humanitarian assistance to communities. Furthermore, if military are potentially seeking protection in civilian infrastructure, this could be breaches of IHL. A suggestion is to address these issues collectively with Ukrainian authorities and military.

A rather fundamental issue was raised whether humanitarian organisations should also speak out about (potential) violations of Law of War, IHL, and Human Rights by Russia and/or by the Russian forces. On the one hand, humanitarian professionals prefer to remain strictly neutral in this, also to ensure access or to ensure international NGOs can deliver aid to the ones in the greatest needs. On the other hand, a strong plea was made to show solidarity with the Ukrainian people that is suffering Russian aggression and has been pulled into a war that is denounced by the vast majority of the international community and international institutions. Not showing solidarity for Ukraine, can be seen as a form of ‘bothsidesisms’. A practical barrier is that international NGOs have limited channels open with Russian authorities to raise such concerns/complaints. Furthermore, so far Russian authorities did not show much understanding for international complaints about Russian aggression.

Some of the available funds for Ukraine require spending on a very short term (e.g. 25% of the funding within six months, as in Giro555). For a number of international NGOs, it can be a challenge to find reliable local partners and/or relevant projects on such short notice.

Some local organisations, on the other hand, have recently published an open letter to donors and international NGOs, stressing the fact that they are ignored and that they barely receive any money from the enormous international funding that is available for Ukraine.

The issue was raised by an international NGOs that they fear their humanitarian aid to civilians close to the frontlines could disincentivize these civilians from seeking shelter in a safer place. On the other hand, it was acknowledged that staying or leaving is a choice to be made by individuals themselves. Another comment was that the people that could leave have already left, and the ones that remain usually just do not have another option.