The Way We Work
Article 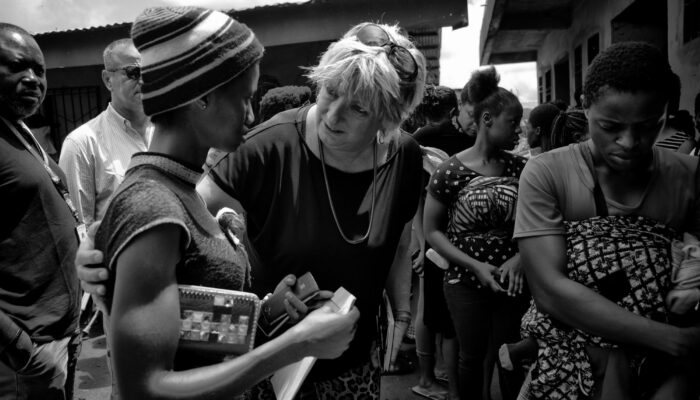 For two and a half years Tineke Ceelen, director of Stichting Vluchteling (Refugee Foundation), was the chair of KUNO. And what an impression she made. She put pressing issues at the top of the agenda; she stood up for humanitarian principles and adequate humanitarian action; and she was never afraid to expose an inconvenient truth, a neglected crisis or a wrongdoing – outside the humanitarian sector or within it. Thank you Tineke for keeping us on our toes.

Tineke will remain well connected to KUNO, as Stichting Vluchteling is KUNO’s Lead Agency. We hope she wil continue to call on us whenever she spots an inconvenient truth or wrongdoing. And as a token of our appreciation, but also as an insight for those who may not know Tineke too well, we have asked three well-involved ‘KUNO-veterans’ to share some of their experiences with Tineke. Three members of the first Steering Committee of KUNO: Hans van den Hoogen, former senior humanitarian officer at the Ministry of Foreign Affairs in the Netherlands and former director humanitarian aid at Oxfam Novib; Bram Jansen, assistant professor Anthropology at Wageningen University and Research; and Ton Huijzer, independent consultant and former director for International Assistance at the Netherlands Red Cross, former IRC, former ICRC and many more.

What unique role does Tineke play in the humanitarian sector in the Netherlands?
Bram: For years, Tineke has been a humanitarian showcase on television, radio and in newspapers. Despite all kinds of resistance, and even threats, she speaks pre-eminently from a moral and practical angle. She moves across all kinds of complex and political objections to repeatedly make the point that it is unacceptable not to take action for people in need.

Her commitment makes her a persuasive voice that tirelessly stands up for the vulnerable in disasters and conflict.

Hans: I first met Tineke in a television studio in Hilversum during the big SHO tsunami TV action in January 2005. At that time, Tineke recently started as director of Stichting Vluchteling, and she was – not yet – ‘the main act’ of the show. That would change later on and she often appeared in TV programmes. And this has a reason. As we say in Dutch: Tineke speaks ‘without flour in the mouth.’ She is straight to the point and speaks from the heart and with emotion. Tineke knows how to show a large audience the misery that victims of crisis and natural disasters go through – and the need to do something about it.

Tineke is full of compassion – and it shows.

What has Tineke meant to KUNO?
Hans: Together with Ton Huijzer, Tineke made a case for establishing a knowledge centre for humanitarian aid. The idea was already there for quite a while, but it became concrete in the run-up and preparations for the World Humanitarian Summit in 2014 and 2015. At that time, I was involved in the ministry. In the ministry I had to deal with the ‘potential’ – the Ministry was not too enthusiastic – co-financing of what was to be called KUNO. I remember the frequent e-mails and phone calls from Ton, asking about the status of the approval by MFA. At the same time, Tineke was lobbying and harassing the directors of the NGOs to get them on board to contribute to the knowledge centre.

Without Ton and Tineke, there would be no KUNO.

Ton: Tineke has been involved with KUNO from the very beginning, or rather from the moment the preparations for KUNO started. In Stichting Vluchteling, KUNO has found a very stable lead agency. Over the last few years, Tineke was the chair of KUNO and has played a crucial role in extending the membership base of KUNO and in building a stronger organisation.

Bram: Tineke has always been supportive of KUNO, and has been particularly generous in facilitating the institutional side of KUNO.

What memory of Tineke will you not quickly forget?
Bram: I remember a good conversation in her office as a result of a talk I gave earlier for the Cooperating Aid Organizations, of which Stichting Vluchteling is also a part. She came in a bit later, and fell into the middle of a discussion about the humanitarian-development nexus, which I had started in order to problematize and give direction to the issue of media representation of giro 555. My approach was that the focus on ultimate crises within SHO, and how this sets the tone in campaigns while little attention is paid to more long-term processes of recovery and development, can lead to problematic image formation (‘donations end up in a bottomless pit’, ‘teach a man to fish’ etc, ‘yet another famine?’). The topic of conversation was whether giro 555 should not do more with the longer term. Later she invited me to talk about this, and it turned out that she was a warm and critical advocate for acute relief aid, a role in which of course there are great uncertainties, and where not every donation immediately leads to visible improvement. Any problematic imagery can be dealt with. In her view, this is a niche that needs to be guarded, and emergency aid does not always have to be tied to development. This was a good meeting, which also showed that Tineke wants to guard, argue and support the role and position of emergency aid.

Ton: I think it was very important that Tineke visited the Ukrainian/Polish border soon after the Russian invasion and followed up with visits to both western and eastern Ukraine. This showed me again who Tineke is, and what I will always remember:

She always wants to see for herself and it not afraid to ask critical questions.

Hans: When Tineke was received a royal honour, the Minister complimented Tineke on her commitment to refugees. Tineke, however, did not hesitate to remind the Minister (Kaag) of the position of political party (D66) and the Cabinet regarding the acceptance of refugee children. Very strong.

Tineke was also regularly invited by the MFA humanitarian team, also after one of her visits to North East Syria. There she had visited refugee camps that housed women and children who had lived under the rule of IS and who had also supported the “IS” ideology and its implementation to some extent. Tineke told in full colour what she had seen, smelt and heard. Colleagues from MFA were impressed, but mainly had questions about facts, numbers, locations, financing. Two things from that conversation remain with me. First: Tineke’s answer to those questions about facts and figures: “you don’t need me for that, you need to invite someone else”. And second: “I abhor the ideology and actions of (some) of these women, but nevertheless I think they should be helped now”.

Humanitarian principles are not hollow phrases for Tineke!

Thank you so much for your support! And also for continuing to propagate the added value of KUNO, “the only place where the humanitarian sector talks about the work, without it being about money“. Nice also to know that you continue to feel connected to KUNO!