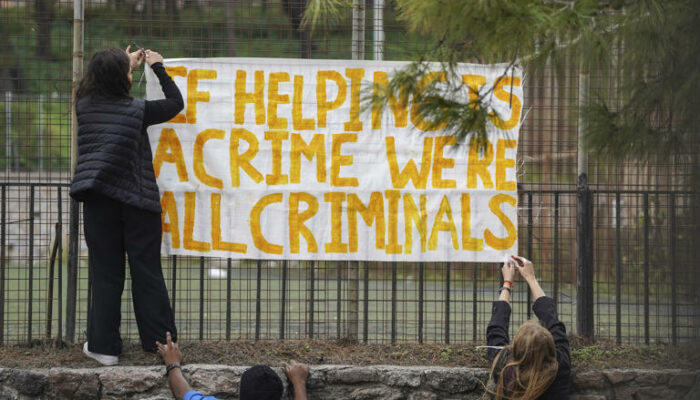 The trial last week has been called ‘the largest case of criminalization of solidarity in Europe’. We should start to feel worried.

The wrong people were on trial. It is not people, like Pieter Wittenberg or the Mardini sisters who should answer, but the authorities who prevent life-saving work, taunt rescue workers or criminalize help.

Last week, the trial against 24 humanitarian aid workers on the Greek island Lesvos took place. They went to trial on charges of espionage, assisting smuggling networks, being members of a criminal organisation and money laundering during the time they were helping migrants after they arrived in Greece in 2015/2016. This trial has been called ‘the largest case of criminalization of solidarity in Europe’. The defendants faced up to 25 years in prison, but luckily, most of the charges are dropped. Judith Sargentini (director of MSF the Netherlands): “If Moria was not the blot of Europe, it is this trend of criminalization. Making the provision of humanitarian aid more difficult or criminalized by some member states seems to be more of a priority than actually providing it, or at least facilitating it. Aid organizations step in where governments fail – consciously or unconsciously. It is incredibly concerning that this helping hand is now literally being handcuffed”. Prof. Thea Hillhorst adds: “this whole process makes humanitarian aid workers think twice before they come to the island to help”.

It is particularly disturbing that on the edges of Europe, more and more people's lives are deliberately endangered, their rescue prevented and aid workers hunted down, arrested and threatened with lawsuits.

This trial is a second attempt to hold a trial. The first was adjourned in November 2021 when the court realised it did not have jurisdiction over one of the defendants, and had to hand the case to a court with higher authority. Thea Hillhorst states: “The accused have been hostaged by the process for years now, which must be very stressful, and there have been periods of imprisonment. Although the case against them was legally extremely weak they were facing a serious sentence.”

What does it mean for the humanitarian aid sector?

Thea: “An attack to one is an attack to the whole sector, I would say”. Tineke is also frustrated about our own government: “It is at least as worrying that our own government remains deafeningly silent about such violations of the law and everything we stand for in our EU community of values.”
Judith: “At the same time, it makes Doctors Without Borders combative. We do not remain silent, because we know that this very silence can cost lives. We continue to provide medical aid in Greece. And we continue to speak out. Regardless of the risks.

We will not be stopped because until proven otherwise, saving lives is not criminal.

Rodrigo Mena (assistant professor International Institute of Social Studies): “Of course, this is not new and reminds me of what has happened in the past in the United States (see here and here), Italy and Spain (see here, here, and here), and elsewhere in Europe (see this special issue), among others. There is also a short video (link), and this website put together some resources on the topics, including journal articles: https://migrationresearch.com/resoma-topic/criminalisation-humanitarian-assistance“