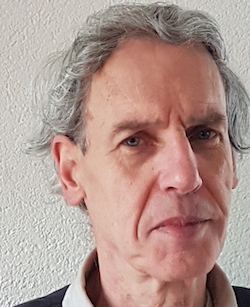 I am a real old hand in the business. Forty years of experience in the humanitarian field is something not many people imitate. After studying agronomy at Wageningen University, I began my career in 1983. What followed was a period in which I travelled the world as an agronomist. Sometimes for the private sector, sometimes for the European Commission, sometimes for the Dutch government. All in relative peace. Until I ended up in Sierra Leone where, quite unexpectedly, a war broke out. When everyone had pretty much left, I stayed and was asked to take on the logistics. In a helicopter, I flew across the country with large stacks of banknotes. “Then we scattered banknotes down so that our relief personnel would still get paid,” he says. Boats and cars had been confiscated, my own house had burned down, a number of colleagues had been kidnapped. Well, one thing led to another: from then on people knew where to find me for help in emergencies: “Disasters happen all the time everywhere.”

For twenty years I worked abroad, in a mixture of acute emergency relief and more long-term development projects. So I know a lot about WASH, Education (I was also a teacher for a time in secondary vocational education in Africa), Shelter, Cash.
After twenty years in the field, I spent twenty years in the Netherlands. There I coordinates emergency aid at CARE, but also shares much of my knowledge with colleagues by providing training, for example on disaster risk reduction. On that theme, I often help country offices to draw up their preparedness plans: how to ensure that you are as well prepared as possible for a disaster. I am also regularly deployed as an expert in food security.
Will I stop when I reach retirement age? “No way!”